Marching Band is a co-curricular course open to all CRN students in grades 9-12. The group is made up of instrumentalists and Color Guard members. All instrumentalists MUST participate in the registered class to take part in the extra-curricular portion of the band program. The Marching Band performs at home and away football games, local parades and events, several concerts throughout the year, competes in the Cavalcade of Bands circuit as well as several local marching band festivals, and goes on a performance tour once every four years.

Adults (teachers, parents, etc.) give students many reasons why they should make music a part of their school careers –  studies have shown the value of participation in music to student development and achievement in the classroom.  And colleges do look for commitment over your high school years – Band is a great activity to have on your resume.  It is hard work and a commitment, but there is so much more. Every year we find most graduating band members say that they cannot imagine high school without Marching Band –  best teacher, best class, most fulfilling, and the source of many, many friendships.

What is the Season?

Immediately after the school year ends in June and before summer vacation really starts, we hold a two-day “Mini-Band Camp”. This Camp does two things — it introduces our new incoming band members to some basic marching skills and it introduces both the newcomers and vets to the music for the upcoming show season.

Family vacations in the summer need to be planned around these dates. Please do take this into consideration when scheduling family vacations.

What does the overall year look like – what do we do? 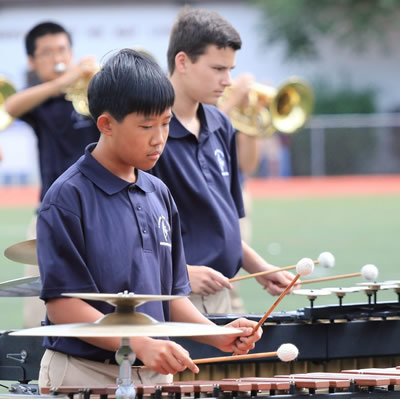 There are no upcoming events.

Once school starts, what is the practice schedule?

What is the schedule for a typical football game? For a competition?

Football games usually take place on Friday evenings. Parents should plan for students to report to school 3 hours prior to the start of away games (Report Time of 4pm) and 2 hours before home games (Report Time 5pm). Most football games will take 2.5-3 hours. On Friday evenings, when most games occur, students are ready for pick-up between 10 and 11pm depending on game location.

Competitions typically occur on Saturdays, and tend to be similar to away football games, both in duration and timing. However, actual performance times are not provided to the Band director sometimes until the week of the competition. These are general guidelines and highly dependent on distance, weather and traffic.

Do you have to purchase the uniform?

There are two uniforms: the regular uniform and the summer uniform. The regular uniform is owned by the school. Students are measured and fitted for their uniform the first week of band camp. Each student must purchase marching shoes and a uniform t-shirt. Most also need to have gloves. Color Guard members purchase a track suit, shoes and accessories. Students must purchase the summer uniform. For musicians it includes a polo shirt, black belt, and khaki. Color Guard summer uniforms are student-purchased as well, and take a slightly different form. All summer uniform items are available for purchase the first week of band camp.

The CRBPA is the Council Rock Band Parent Association. The purpose of the CRBPA is to promote, assist and support the instrumental music organizations at Council Rock North. We help with uniforms; at all games, band competitions, and special events (home and away as requested by the Band Director); and plan and execute fundraising activities as needed. The funds from such activities are used to support the activities for student members of the CRHSN Bands. None of the band’s activities could happen without the support of parent volunteers.

I’m concerned about the amount of time that will be taken away from academics due to the rehearsal schedule.

In our experience, the students involved in band have strong academic performance and often their best report cards occur during marching season because they are disciplined in their time management. Weekly rehearsals start at 3pm so students can go to clinic or get help after school if needed. With such a large group of students across all grades, the band room often becomes a tutoring and homework space where kids can find help from their peers for just about any class. And, remember, marching season only lasts to the beginning of November.

I have seen the marching band at the Halloween parade. What else are they involved in during the year? Is it only during the Marching Season or other times, too?

The marching band is the busiest during marching season (August- early November), but also has other performances. The band performs at two concerts, one in November and one in Spring. The band also performs in the community every year at the Halloween, Holiday, and Memorial Day Parades, and at the Special Olympics Opening Ceremony. Additional opportunities to play in the community frequently come up.

Do band members get LINCS credits for performing at football games?

No. Football games are considered to be co-curricular to the classroom portion of Marching band. However, students can get LINCS credit for:

– performing in another ensemble. For instance, orchestra, Newtown Middle bands, pit orchestra for the musical, National Anthem for a basketball game, etc.

– Community parades and other civic events such as Special Olympics Opening Ceremonies.

Most Marching Band students find they can fulfill the entire LINCS requirement through band performances.

I have heard the band went to Europe! When do the kids go on the trips? Where do they go? Is it optional? How do they raise the money to go?

The band goes on a trip once every four years. Our next trip will be in the 2018-2019 school year. These trips are open to all band members and their families, but are optional. In the past the band has gone to Spain, Argentina, and most recently a tour of three European cities: Turin, Nice and Barcelona. Major fundraisers held almost every year are Trivia Night, Council Rock Marching Band Invitational competition, Jazz at the Rock Jazz Festival and car washes. During trip years, fundraising activities increase to include gift card sales, candy sales, restaurant spirit nights, and more. The CRBPA works hard to plan fundraising activities to help reduce the cost of this trip. Students may participate in as many or as few fundraisers as they wish, but the more who participate, the better the outcome for the entire band.

What is the best time for vacationing during the summer to avoid conflicts with marching band rehearsals?

July through the first week of August. Generally speaking, band camp begins the second full week of August each year, regardless of where Labor Day falls. Students are engaged in rehearsals and performances from the second week of August to the start of school, so we encourage people to plan vacations for earlier in the summer.

My child is having difficulty finding room in the schedule for the band class. Is there anything we can do?

Yes. Marching band is an alternate day elective. To free up room for music in their schedule, some students take PE over the summer at MBIT. In addition, several classes are available through Bucks County Community College, and CR North is now offering some courses online. Students are occasionally pushed toward courses that are not required for graduation and often interfere with band. Music is looked on VERY favorably by college admissions, as four years of high school music translates into ten years of disciplined study on an instrument, which demonstrates dedication to an art form that exercises ALL parts of the brain!