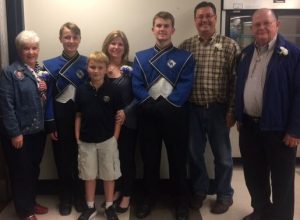 Marching Band: A family tradition
from generation to generation
Their story — the Frawley and Stockburger
families, an interview with Jennifer Frawley

The CRBPA Newsletter interviewed Jennifer Frawley, CRBPA Administrative Chair and band parent of Sean and Declan. Sean is a Senior and Section Leader, and Declan is a Freshman. Jennifer teaches in the Council Rock School District and is an alumna of Council Rock High School Marching Band.

How has the band changed since you were in CR Band?

When I was in the band, there were 250-300 members. There was one Council Rock High School at the time. I played the trumpet freshman year and I was in the “band front” the next three years. Back then we had “silks” and “rifles” who were like our colorguard. We also had a dance/Pom Pom/kick line squad called the Indianettes. The marching and music styles were more traditional than the current corps style.

Tell us about the other musicians in your family.

I was the middle of 5 children. Each of us was in the “Indian Marching Band”. My brother George [Stockburger] played saxophone and was the drum major my freshman year. My sister Amy played the flute and was in the band front, my sister Becky played clarinet, and Heather (and her husband Andrew) played the trumpet. a picture of our family and my parents at senior recognition. My parents’ involvement with the band was very important to us. My mom was band parent president, uniform chair, chaperone, snack mom, and more. My dad drove the equipment truck for at least 12 years to all of the away games and competitions. They continue to support their 13 grandchildren by attending their concerts, games, and events. My mom was the color guard captain in the Neshaminy band in the 1950s.

All of my children play instruments. They all started piano around age 5. Sean plays the alto and soprano saxophone in many CR music groups and is currently learning several other instruments. He is pursuing music technology as his college major. Declan plays the trumpet and trombone. Ronan is in 4th grade and he just started the trumpet. Our music room resembles a music store, and that is a great thing.

What was it like for you to share your band experiences with Sean over the last 4 years?

For me, it is always nostalgic to walk through the band room, sit in the stands, and travel with the band. It is great to see that a few things haven’t changed after all these years. The color guard still does a small stand routine to the fight song that I created in the late 1980s. When I was in band we did a trip every two years, but they were within the eastern United States. Now

the students have an amazing opportunity to travel the world with the band. Sean probably got tired of me comparing over the four years, but I bet he will do the same someday.

What advice would you give an incoming band parent and marching band member?

I enjoy promoting the music programs in our schools because I know how valuable my and my children and siblings’ experiences have been. I teach elementary school in CR and am always advocating the value of learning an instrument and joining the various music groups. I tell parents to get involved, even if it is as simple as riding the bus to an away game, attending monthly band parent meetings, or selling snacks at a concert. You will make many new friends and it is a great way to get to know your children’s friends. Being a band parent allows you to be involved in your child’s interests, without being intrusive, while also meeting new people.

For students, I always promote the benefits of being a part of a phenomenal group of kids, many of whom will remain lifelong friends. There is a great advantage in starting high school with band camp and showing up on the first day with over 100 friends. The social benefits of band parties, bus rides, and band trips are immeasurable. Their experiences in managing school work, band commitments, and other activities help prepare them well for independence in college and their life beyond college. But mostly I tell them that it will be the best part of their high school experience. I can’t tell you many names of students in my biology or English class, but after nearly 30 years I am still friends with dozens of my band friends. My best advice is to give it a try, even if you aren’t sure if it is for you. You will wonder what you would have done if you hadn’t joined. If they are already members I would suggest taking lots of pictures and take advantage of all the opportunities.